When it comes to therapy, pets can be a great source. They offer companionship and plead for pettings—meditative motions that can ease stress. Indeed, many pet owners who adopted their furbabies say that they're not really sure who rescued whom. But problems arise as people age and slowly lose the ability to care for something living. Hasbro has taken a stab at solving that problem by creating the Joy for All Companion Pets line, which makes robotic cats for senior citizens.

Running $99.99 each, these robo-kitties are realistic in terms of their fur, sounds, behaviors, purrs, and interactions with humans. They don't need a litter box or a food bowl, just four C-sized batteries and love. They will nuzzle you if you touch their cheeks and roll over for belly scratches if you pet their backs long enough.

You might think a robot could never replace a living, breathing creature, but that's not necessarily the case; technology like this has been known to help people. Japan created a similar device called PARO, which was in the shape of a seal instead of a cat. It was granted the honor of being “the World's Most Therapeutic Robot,” having many of the same benefits as an actual, living pet. 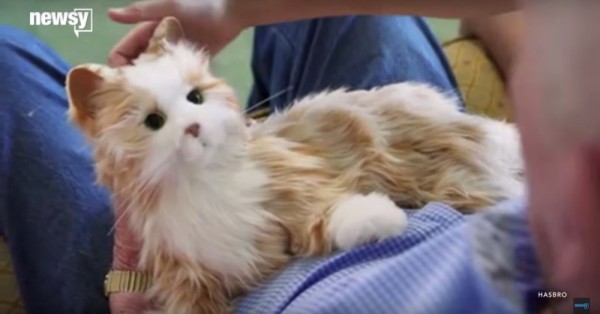 So with approximately 43 percent of seniors reporting frequent loneliness, PARO's kitty counterparts may offer a viable solution. But it's natural to feel a little disturbed, too, due to the possibilities that could arise: might people use this as an excuse to avoid spending time with elderly relatives? Let's hope not. For some families, however, consistent, quality time with elderly family members is difficult to achieve because of life circumstances. Those are instances where the Companion Pet cats could truly come in handy.

Whatever the case, loneliness is undoubtedly an issue, as well as a risk factor for earlier death. Anything that works to beat it should perhaps be considered, if not completely embraced.

What's your opinion on this new toy for seniors?