Dementia can feel like a thief, slowly stealing a person’s memories and chipping away at the very essence of their character.

Yet for many people who suffer from age-related memory loss or Alzheimer’s disease there are moments of clarity, small instances when the true personality comes shining through the haze of confusion. Nick Harvey, a music composer for television programs in East Sussex, England, has seen these brief flickers of character in the eyes of his father, Paul Harvey, and recently he managed to capture one of these moments on camera. 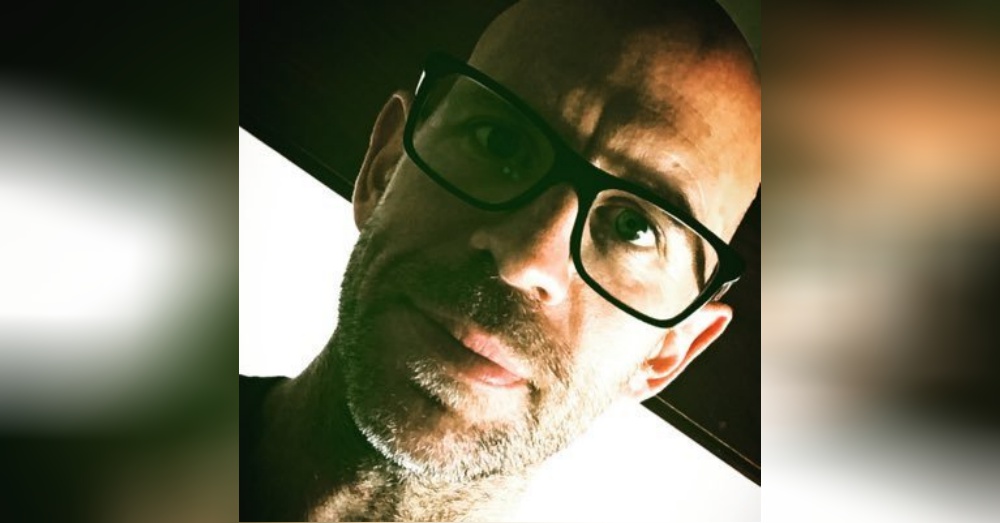 Growing up, Nick’s father was a music teacher, composer, and concert pianist. Nick learned how to be a composer at his father’s side, sitting at the family piano and watching his fingers make magic on the keyboard before them. Sadly, the years have caught up to Paul, who is now seventy-nine and suffers from dementia. He’s been in and out of the hospital so frequently that he hadn’t been to his son’s home in over a year, until a recent weekend when he was finally feeling up to joining them for Sunday lunch.

The second he entered Nick’s living room he made a beeline for the piano. “It is like a magnet to him — he is MADE of music,” Nick explained. As Paul sat at the piano Nick began to record video, asking his father to play him something. At first Paul seems confused, muttering that he doesn’t remember how to play anything. After Nick suggests “Where’s The Sunshine?” an original piece Paul wrote decades ago, Paul puts his hands on the keys and begins to play. 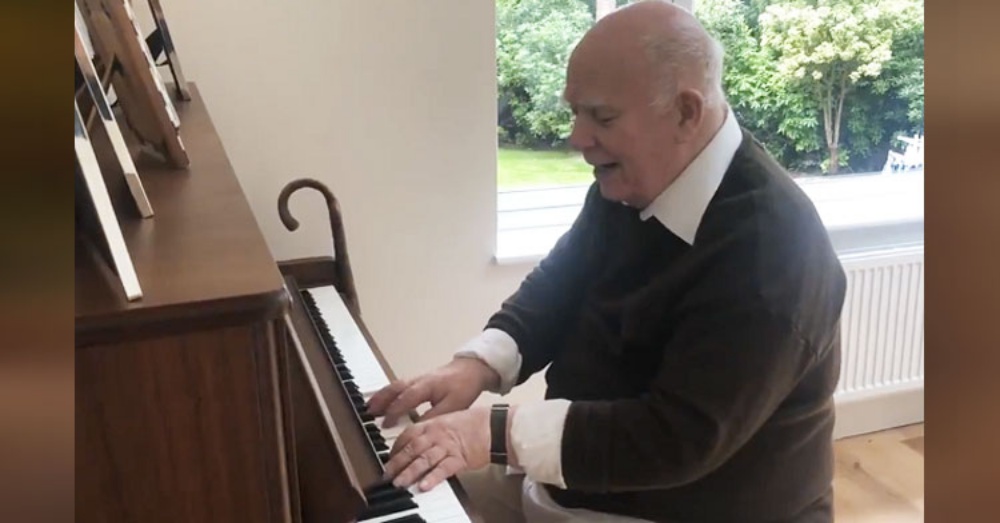 Pure magic flows from the old man’s fingertips as he flawlessly plays a beautiful song that the world has never heard before. “I didn’t know how many more chances I’d get to capture him playing like that,” Nick said. The song was originally written by Paul in the 1980s when he was the music director of a British secondary school. Nick says that his father wrote many songs during that time period, many of which could have “easily been good enough for the West End stage.”

After listening to the way the song rises and falls in a beautiful and emotional crescendo, we believe him. 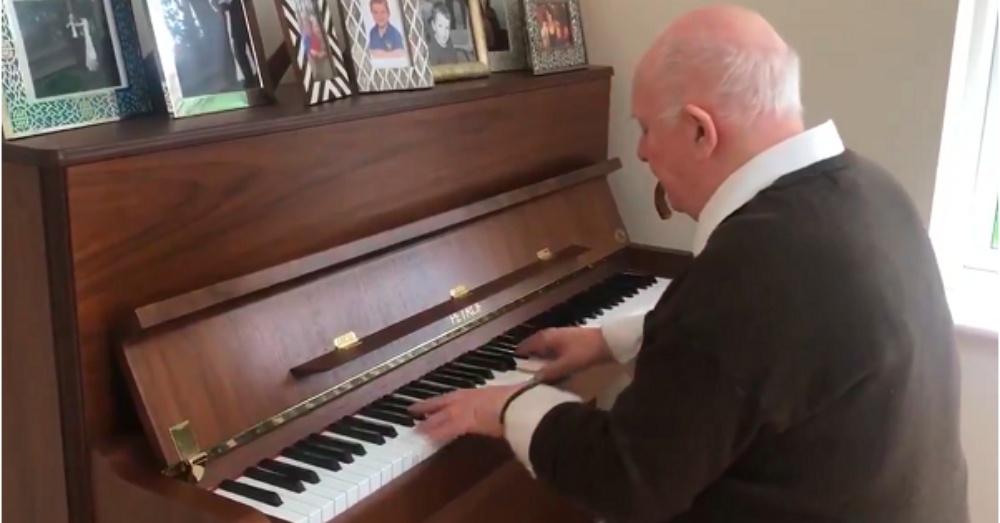 Nick uploaded the video to his Twitter page, explaining, “Dad has dementia. Sometimes he drifts into another world and I feel like I’m losing him. He is never more present, however, than when he plays the piano. He came to mine today and I asked him to play one of his compositions. He thought he wouldn’t be able to remember it.”

The response was instantaneous and overwhelming. Within a day the video had been viewed over 2 million times, and soon news organizations like the BBC, Associated Press, and “The Washington Post” came knocking. Celebrities started retweeting the video, and by the end of its first day online Nick had managed to secure a charitable gig for his father and some of the United Kingdom’s greatest musicians. 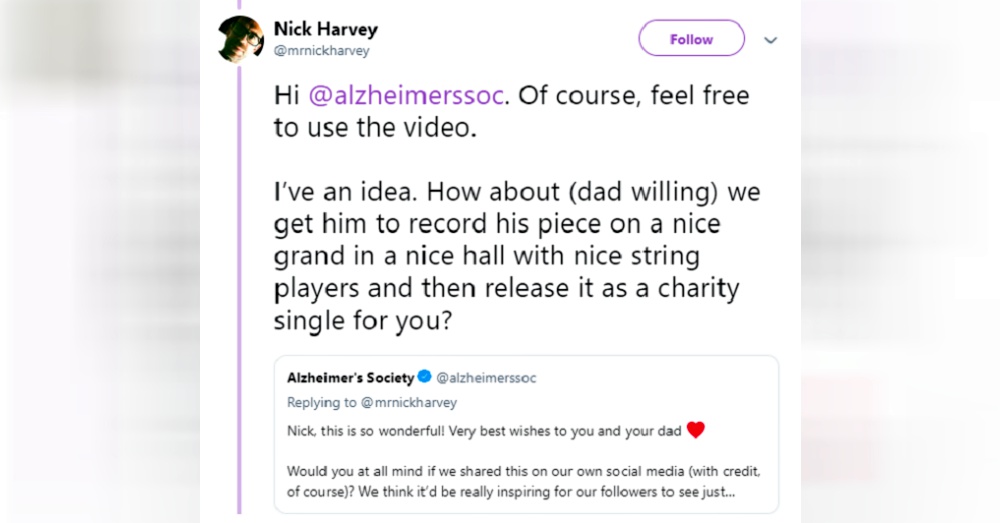 Thanks to this tweet, Paul is now slated to perform his song on a grand piano in a gorgeous music hall, accompanied by incredible artists, to create a single that will be sold for Alzheimer’s research. 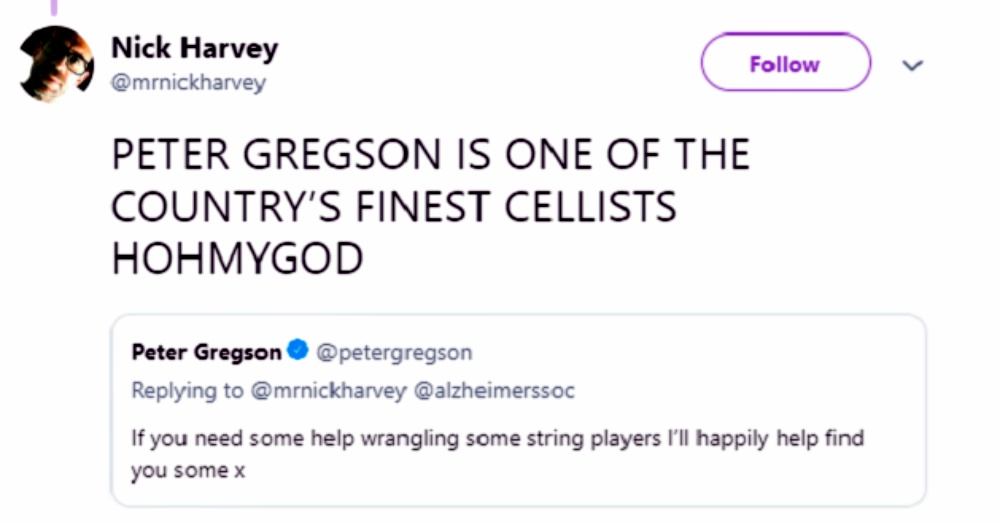 Paul is aware of the online hullabaloo and couldn’t be happier, telling one news agency, “I am very pleased that something I’ve written has had such an effect. It’s come so late in life, it shows that it can happen at any time.” 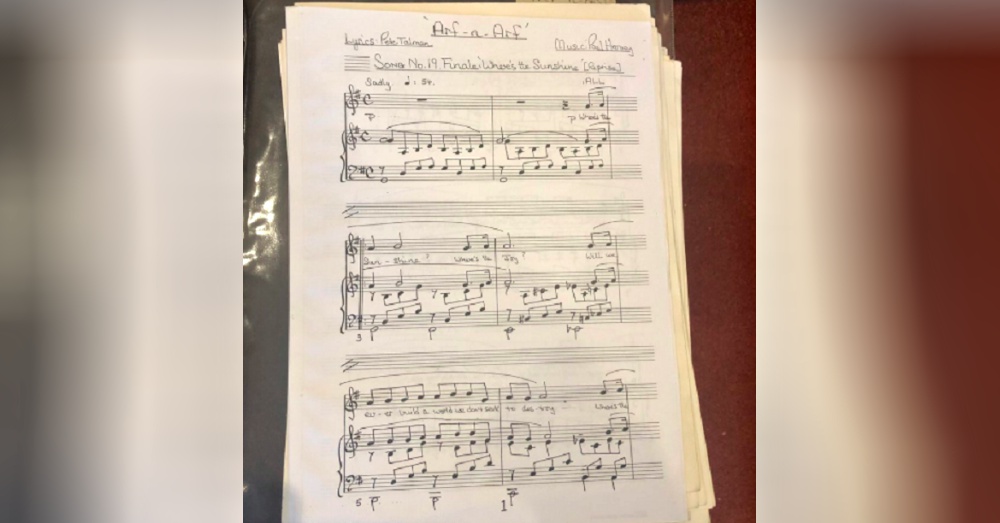 What a beautiful reminder! Not only do we love that Paul is finding a bit of internet fame this late in life, but the fact that his true personality and talents are still lying dormant under the fog of dementia is encouraging. Perhaps with more research we will one day find a cure for this troubling human condition, but for now it’s enough to see glimmers of hope in people like Paul.

Watch Paul play “Where’s The Sunshine?” in the video below, and be sure to share to make someone smile today.

Dad has dementia. Sometimes he drifts into another world and I feel like I’m losing him. He is never more present, however, than when he plays the piano.

He came to mine today and I asked him to play one of his compositions. He thought he wouldn’t be able to remember it. pic.twitter.com/EQGcXBwB3w

Cheap Hypertension Drug Nilvadipine Could Boost Blood Flow To The Brain And Slow Down Alzheimer’s Disease, Study Shows: Click “Next” below!