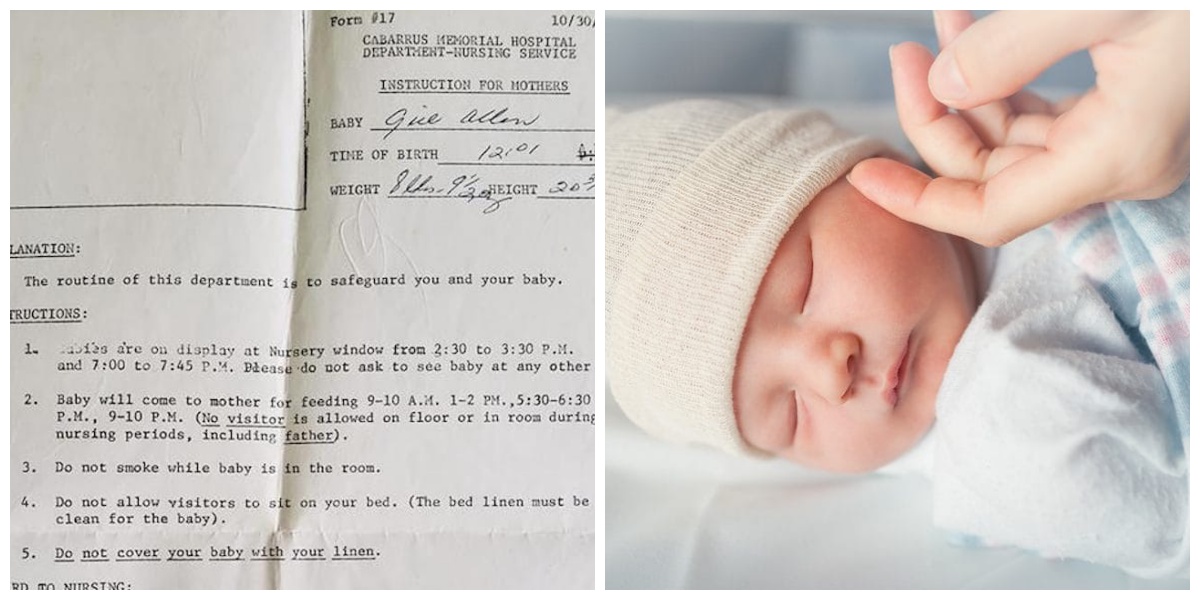 Parenthood has seriously changed since 1968, as this viral set of instructions makes very clear.

Facebook user Micala Gabrielle Henson came across a list of rules for new mothers, written by a hospital in 1968.

Some of the instructions on the list are clearly outdated. One rule states that no fathers are allowed on the delivery floor during nursing times, and no smoking is allowed while the baby is in the hospital room (other times it’s totally cool, though!).

Other instructions on the list are so foreign that they’re honestly hard to understand.

“During first twenty-four hours, allow baby to nurse 5 minutes only,” reads one instruction.

Yes, you read that correctly. Five minutes of nursing. That’s it!

Also, new moms had to adhere to a long list of forbidden foods.

It’s no secret that life has changed A LOT since the 1960s, and parenting is no exception. Many common practices from back then would be completely foreign to parents nowadays.

And nothing makes that clearer than this set of instructions for new mothers, given out by a hospital in 1968.

Micala Gabrielle Henson posted the list on Facebook after her mom discovered it while cleaning out her old things.

The post went viral, and it’s easy to see why. These instructions are baffling in so many different ways!

According to the instructions, babies should nurse for only five minutes during the first 24 hours. The next day, they get seven minutes. On the fourth and fifth days, that increases to 15 minutes.

That’s it!!! In 1968, it seems that mothers’ nipples were more of a priority than the whole feeding-the-baby thing?

“If Baby Nurses Longer It May Cause The Nipple To Become Sore,” the instructions explain.


Another baffling part of the instructions: all of the things that are banned during this period.

First, no visitors are allowed on the floor during nursing periods. Not even dads!

Second, smoking is explicitly prohibited — but only while the baby is in the room. What a different time.

Also, there’s a long list of foods that new mothers are forbidden to eat. This section is in all caps, which is how you know it’s important.

No chocolate candy is allowed. Also, no raw apples, strawberries, or cherries.

Someone please explain this.

Other foods on the forbidden list include cabbage, nuts, onions, and green coconut cake.

For moms who are not breastfeeding, nurses will prepare the formula and bring it to the room during feeding times. Nice!

As Scary Mommy points out, this entire list was written for moms who were still in the hospital after birth. It implies that moms were allowed (or even encouraged) to hang out in the hospital for a while post-birth, which is very much not the case today.

Another person wrote, “Wow! I’m surprised we all survived.”

This list definitely proves that parents today have a very different experience than parents in the 1960s.