If you like to drink, you’re in luck. It has been thought that alcohol impaired long-term cognitive function and increased the risk of dementia. However, new research suggests that may not be the case at all.

The 30-year study, conducted at the University of California, San Diego, followed 1,344 older people (728 women and 616 men) from 1984 to 2013. The Mini Mental State Examination, a typical exam used to determine whether a person has dementia, was used to measure each participant’s mental health every four years.

The results were intriguing. Those who drank moderate to heavy amounts of alcohol (as determined based on their age and sex by the National Institute on Alcohol Abuse and Alcoholism) five to seven times per week were twice as likely to make it to age 85 without significant signs of cognitive impairment.

According to study author and graduate student Erin Richard, the research suggests that drinking could help seniors keep their brains healthy and dementia-free:

“This study shows that moderate drinking may be part of a healthy lifestyle to maintain cognitive fitness in aging,” she says.

Downing more than four drinks per day was classed as excessive and—although not studied in this research—is likely to increase the risk of long-term cognitive impairment, based on previous research. It is not recommended, therefore, that anyone who has trouble stopping after just a couple of drinks start consuming alcohol in an effort to maintain cognitive health.

“It is important to point out that there were very few individuals in our study who drank to excess,” says study author Dr. Linda McEvoy, “So our study does not show how excessive or binge-type drinking may affect longevity and cognitive health in aging.” 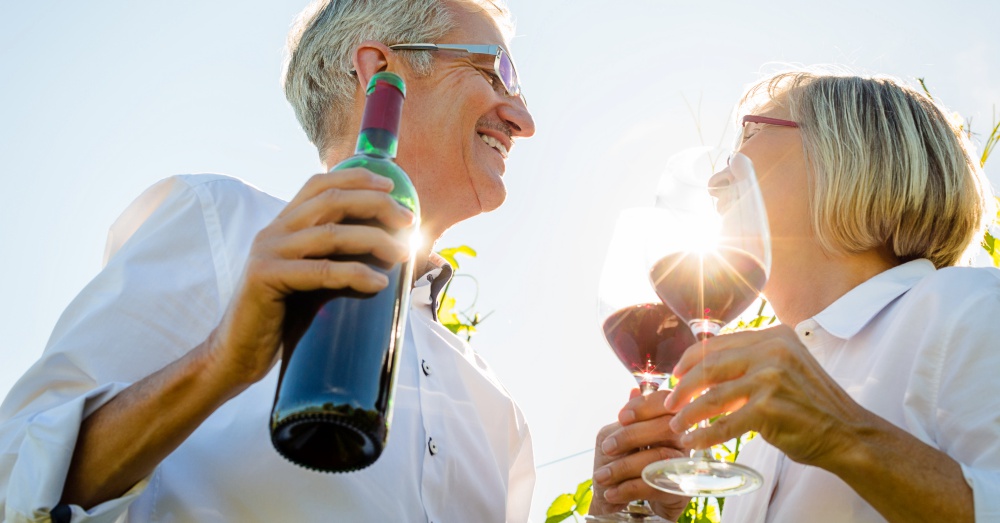 This research may not apply to some segments of the population, however. It’s worth noting that the study was conducted using data from white middle-class Californians, 99 percent of whom had some college education. There is not yet any data on whether heavy drinking has any impact on the likelihood for other demographics to develop Alzheimer’s disease.

The study authors also warn that the alcohol itself may not be the cause (or perhaps not the whole cause) of the good cognitive health seen in moderate to heavy drinkers. People who consume moderate amounts of wine on a regular basis tend to have higher incomes and education levels, which is likely to be a contributing factor. So even if you’re choosing to supplement your brain health routine with alcohol, you should still be reading, exercising, and doing whatever else you can to support your cognitive function.