For months, Ole Kassow passed 97-year-old Thorkild Thim while on his bicycle commute in Copenhagen, Denmark. Day in and day out, Thorkild sat on a wooden bench outside his senior home, watching the parade of bikes pass by him. He had been a bicycle commuter for over 80 years, and missed the feeling of freedom that comes from riding a bike. Now, his mobility lessened, he contented himself with merrily waving to passing cyclists.

Ole finally stopped to chat with Thorkild one day in 2012, out of curiosity about the neighborhood fixture. He says, “Seeing this old guy sitting on his own every day outside a care home got me wondering if he used to cycle around the city, just like I do every day.” Ole discovered that Thorkild did miss his days as a cyclist, and the wheels in Ole’s head started turning. A week later, he showed up at the senior home with a rickshaw and told Thorkild to jump in. Thorkild happily obliged. 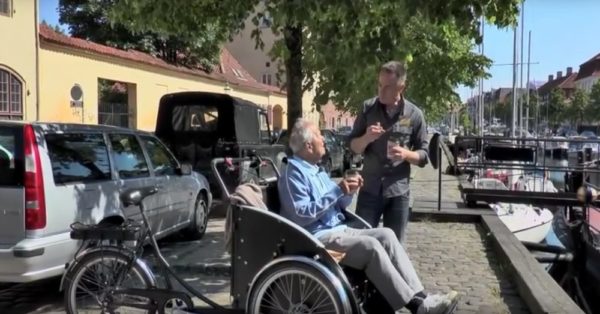 Thus was born Cycling Without Age. Ole and his friends began giving other senior home residents rides around town, and they soon amassed a fleet of cargo bikes and trishaws. Pedaling around the city, they got the word out around the program, and recruited a team of eager volunteers. Today, Denmark has over 600 volunteers, ranging in age from 16 to 86, serving over 150 senior homes. It has also become a global phenomenon, presently having branches in 51 cities in 18 countries. 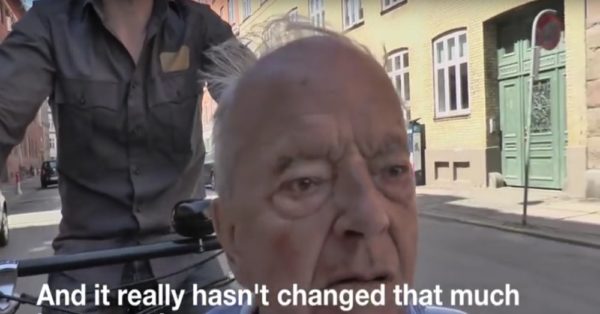 For Thorkild, the rides are a trip down memory lane. As they pass various streets, parks, and landmarks, he recalls the life he used to live. He points out the house he used to live in when he was in the military, the shop he owned for 25 years, the paths he once walked. As the memories come flooding back, he contentedly takes in the scenery, enjoys feeling the wind in his hair, and feels the freedom he so greatly missed.

See Thorkild and Ole’s ride through Copenhagen below!