It can become increasingly difficult to find marriages that lasts years or decades, let alone a lifetime. However, this wasn’t the case with Bobby and his wife, an elderly couple who faithfully considered their vows a symbol of their eternal love.

So when Bobby’s wife passed, the elderly gentleman was at his wit’s end. The couple had been married for so long that the venerable old man didn’t know what to do without his loving partner, who’d spent most of her life nearby his side. 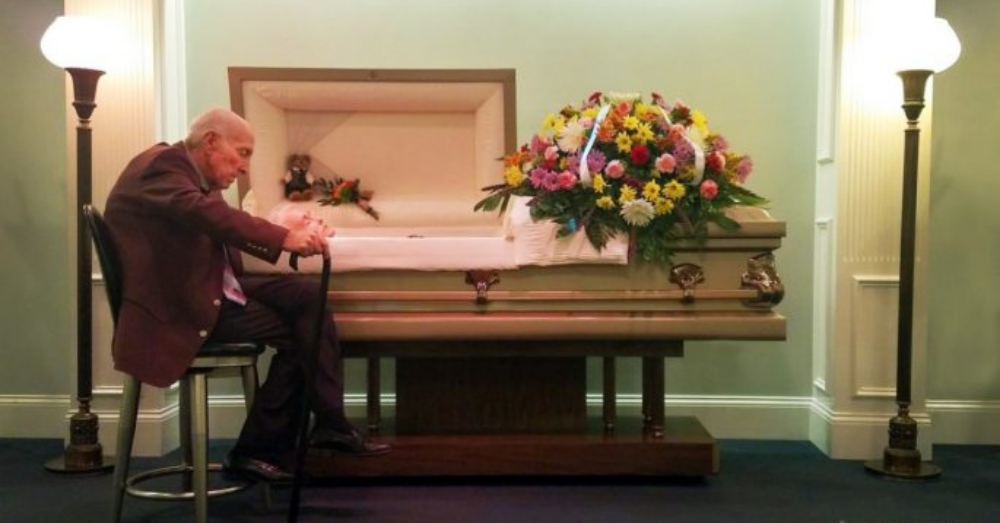 When it came time to attend his beloved wife’s wake, the broken-hearted widower wasn’t even sure he’d be able to muster the strength. Nor could he miss saying goodbye to the woman who’d faithfully stood by his side all these years.

When the sad day finally arrived, Bobby lovingly stood vigil over his late partner’s body. The rest of the family would be arriving shortly, but for now, he relished these final moments alone with his beloved bride. Tears trickled down his cheeks as he grabbed his love’s hand for the last time and reflected on their long life together. “I know you can’t hear me, but I love you,” he softly whispered.

A photographer happened to capture this emotional moment on camera, and later – with the family’s permission — shared this poignant moment online.

“At the request of Bobby Moore and his family, I am sharing this narrative and photograph,” photojournalist April Shepperd wrote on her blog, PositiveOutlooks.

“This story was never meant to be seen by anyone,” she noted. “As I watched Bobby with his wife I knew I was privileged to share a moment that conveyed volumes of time. As a photojournalist, I know photographs such as this capture verbs.”

The poignant photo also proves that old adage of a photo being “worth a thousand words.” In this case, the snapshot suggests that true love — despite the rising rates of divorce these days — still isn’t dead.