Stephanie Gefroh had a dilemma. She had just become engaged, and she and her fiancé were beginning to plan their dream wedding for the following year.

They envisioned a large celebration filled with friends and family at a lake near their home in Minneapolis, Minnesota. But there was a snag in that plan – Stephanie’s mother, Susan, has Alzheimer’s and would likely have great difficulties making the nearly four-hour trek to the wedding venue, especially if her condition continued to decline in the coming year. And it would be nearly impossible for her to travel the six hours from her hometown of Devil’s Lake, North Dakota, to Minneapolis.

So Stephanie and her fiancé, Bryan, had to make a decision. 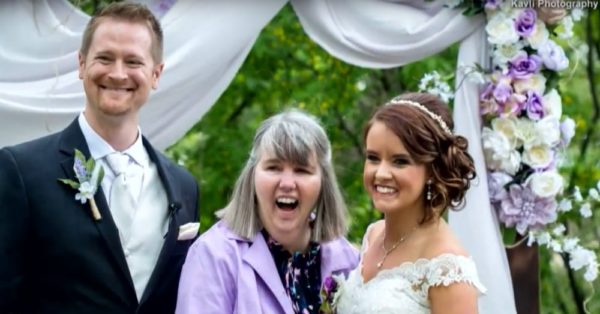 It was Stephanie’s sister Amber who suggested holding the wedding at their mother’s house. Stephanie was at first saddened by the idea that friends and relatives in Minneapolis would be unlikely to make it to North Dakota, and that they would need to have two separate ceremonies. But she and Bryan knew it was the right thing to do.

They had already planned a trip to visit her mother in 25 days, and thought, “Should we just do it then?” And so they did.

Friends and family sprang into action to make the tight deadline. Amber and her husband spruced up the yard, sourced chairs and tables, and made the aisle to the altar spectacular. Various loved ones made the food, cake, decorations, and floral arrangements, and the man who first introduced the bride and groom to each other officiated the ceremony.

Stephanie says, “I know I definitely could not have pulled this off without my sister, brother-in-law, aunts and grandmothers. They all came together to make our day so special. It turned out so beautifully.” 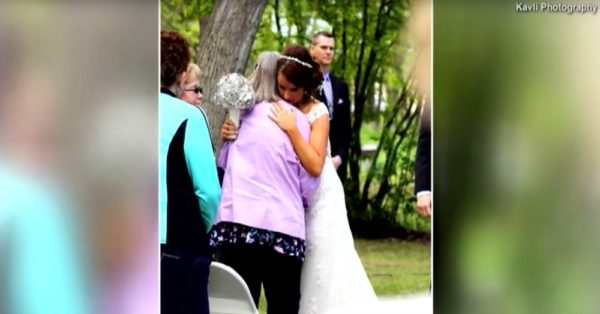 The day of the wedding, it was up in the air whether or not Susan would venture outside for the ceremony. She didn’t seem to recognize what was happening, or why there was such a crowd in her home.

On the days leading up to the wedding, she hadn’t wanted to go outside at all. One of her caregivers convinced her to join the crowd, and Susan took her honored position in the front row as Stephanie and Bryan exchanged vows.

You can see from the beaming smiles that they made the right call.

Click here to visit Stephanie and Bryon’s Facebook page helping children of parents suffering from early-onset Alzheimer’s, and see their video below!