An elderly Chinese woman with Alzheimer’s disease is safe after a harrowing 10-story climb down the outside of her building. Her family allegedly locked her inside her flat to keep her safe from wandering, but it didn’t stop this, granny, who is obviously an escape artist down to the bone, from getting out to see the world.

Firefighters in Chengdu, China, first heard that a woman was “hanging” off the side of a building around 10 am. They arrived on the scene to find the little old woman clinging to a red cloth bag containing her belongings as she carefully made her way down, using the metal ventilation slats of an air conditioning unit as a ladder.

Crowds gathered to watch and take pictures as the woman continued her perilous journey, and emergency prepared to lay out an inflatable mattress to break her fall on the ground below.

It’s uncertain which window the woman climbed out of, but reports indicate that she exited the building on the 14th story, where her flat is located, and climbed down to the fourth story, where a family apparently opened their window and pulled her inside to safety. Other reports indicate that building staff may have pulled her in at the 5th story ledge, where she is said to have frozen. 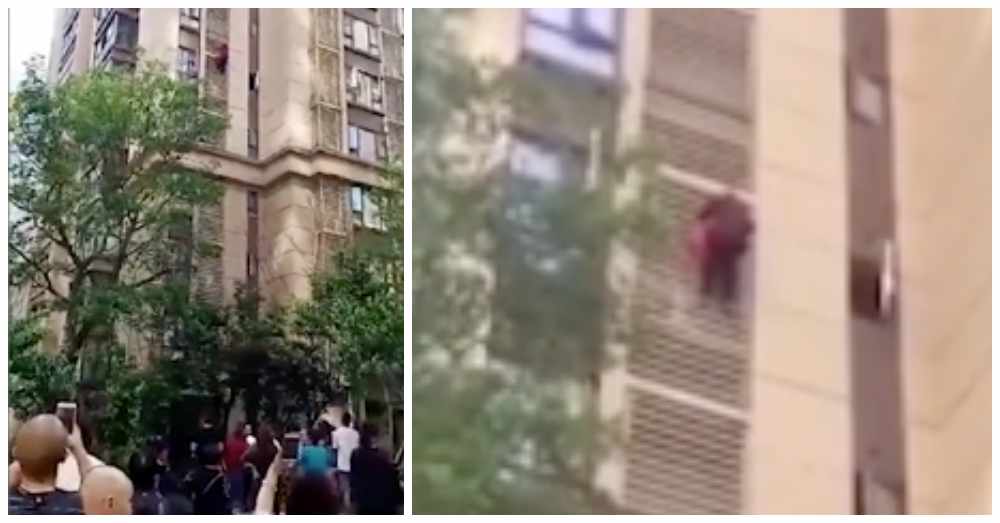 After being saved from the terrifying possibility of falling to her death, the woman was brought to the first floor and examined for injuries. When emergency personnel determined she was okay, she was returned to her family.

The elderly woman’s escapist tendencies are certainly concerning, but her family’s decision to lock her in her apartment is worrisome as well. Hopefully, this family will work out a better system for care and monitoring of their grandmother so nothing like this happens again and so that she has a safe way to evacuate the building in case of fire or another emergency.

Check out the footage below to see this brave elderly woman making her way down the side of a building.

How to Prepare for Natural Disasters with a Loved One Who Has Alzheimer's: Click “Next” below!